To share your memory on the wall of Amos Hendricks, sign in using one of the following options:

To send flowers to the family or plant a tree in memory of Amos Hendricks, please visit our Heartfelt Sympathies Store.

Receive notifications about information and event scheduling for Amos

There are no events scheduled. You can still show your support by sending flowers directly to the family, or planting a memorial tree in memory of Amos Hendricks.
Visit the Heartfelt Sympathies Store

We encourage you to share your most beloved memories of Amos here, so that the family and other loved ones can always see it. You can upload cherished photographs, or share your favorite stories, and can even comment on those shared by others.

Posted Apr 04, 2020 at 12:00am
Very sorry to hear about Uncle Amos. Grateful to have known Aunt Nancy and Uncle Amos and the rest of the family.Love, Ann Mc Guire & Brianna ~ Ann Mc Guire, Florida Contact Me
Comment Share
Share via:
MA

Posted Apr 02, 2020 at 12:00am
To all the Hendricks family, it is great sorrow that I leaned of Amos's passing. He was such a wonderful person, great father & husband I will always have wonderful memories of Amos & Nancy when they were my neighbors and when I use to babysit, John is my Godchild. My thoughts and prayers are with all of the family. Rest in Peace, Amos & Nancy. ~ Maryann (Suozzo) & Joe Albite, Marshalls Creek, Pennsylvania
Comment Share
Share via:
HS

Posted Apr 01, 2020 at 12:00am
To the Hendricks family it is with much sorrow that we learned of Amos's passing. He was a wonderful person and we cherish the memories ofhim as a work partner and fisherman. His Nancy and his family were his everything. RIP my friendFrom our hearts,Bob & Mary Ann CasoleSeaside Park, NJ
Comment Share
Share via:
AL

Posted Mar 31, 2020 at 12:00am
Amy,We are so sorry to hear about the loss of your Father. I only had the pleasure of meeting him a few times when he was with you in Siesta Key. I remember the joy he had fishing with Kyle. I know he will always be in your heart and thoughts. You should be very proud of the way you and your family cared for him in his later years. Your Father has now rejoined your Mother in Heaven after a life well lived. We will keep You, Bob, Caitlin , Kyle and the rest of your family in our prayers. ~ Amy & Phil Larkin, Cape Coral, Florida
Comment Share
Share via:
AG

Posted Mar 31, 2020 at 12:00am
Wonderful family - God bless Amos and Nancy. It was a great blessing in my life to know them - they always made you feel welcome in their home. To Michael Dave Tom Terry John Amy Nora Flyn Ginny Mary Jo - thanks for sharing you mom and dad with us. I have such wonderful memories of the "Hen House" ! My you have peace in your hearts knowing how deeply your parents impacted others with their commitment to each other, to you and community. ~ Amy Gogoj, Yardley, Pennsylvania
Comment Share
Share via: 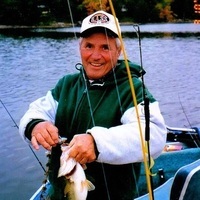