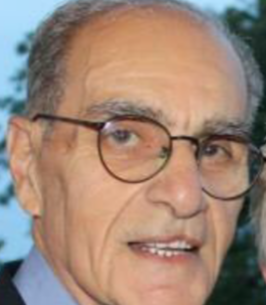 A lifelong resident of Lambertville, Gene was a member of St. John the Evangelist Roman Catholic Church and attended Mass on a daily basis. For many years Gene was the building and fire inspector for numerous municipalities including Lambertville, Stockton, West Amwell, Kingwood and Hopewell and was a member of BOCA, the Building Officials Code Administration. He also taught Code Administration at Trenton University.

A graduate of Trenton Catholic High School, for 15 years Gene worked side by side with his wife Emily running their family store “Venettone’s” in the 1st ward section of Lambertville. An avid hunter, fisherman, musician, and sports fan – he belonged to Ducks Unlimited, was a member of the Young Men’s Athletic Association, played the French horn in the Raleigh Raiders Drum and Bugle Corps and was an avid Notre Dame fan. As an accomplished woodworker and designer, Gene had a hand in building several houses including his own.

Son of the late Michael and Mary Nanni Venettone, he is survived by his wife of 64 years Emily Wood Venettone, his sister Sylvia Sydenglanz, his sister-in-law Brenda Wood, his daughter Mary Louise Venettone and her wife Randi Platt, his nephew Jack Venettone and his wife Heather as well as several nieces and nephews.

A Mass of Christian Burial will be celebrated 11:00 am on Thursday September 22, 2022 at St. John’s the Evangelist Roman Catholic Church, Bridge St. Lambertville.

In lieu of flowers memorial contributions may be made to the Lambertville Fire Department, 230 N. Main St. Lambertville, NJ 08530.