To share your memory on the wall of Harry Naylor, sign in using one of the following options:

To send flowers to the family or plant a tree in memory of Harry G Naylor Sr., please visit our Heartfelt Sympathies Store.

Receive notifications about information and event scheduling for Harry

We encourage you to share your most beloved memories of Harry here, so that the family and other loved ones can always see it. You can upload cherished photographs, or share your favorite stories, and can even comment on those shared by others.

Posted Oct 03, 2019 at 12:00am
Harry was a coworker in the Park Service. I remember him as fun loving and professional. We spoke and shared a joke at firearms qualifications and training a number of times. I wish his family and friends peace and sympathy on his passing. May God bless you all. May God grant Harry eternal life, and may we all meet together one day in Gods eternal kingdom. Semper Fidelis ~ David Lord, Dingmans Ferry, Pennsylvania
Comment Share
Share via:
DW

Posted Oct 02, 2019 at 12:00am
My thoughts and prayers are with the Naylor Family I have many memories of Harry from our early days playing little league to adulthood. May he be a peace ~ David Wintemute, Lambertville, New Jersey
Comment Share
Share via:
BE

Posted Oct 02, 2019 at 12:00am
I am so sorry to hear about Harry. My family lived across the street. My Dad John and Mom Joyce Schultz lived on the corner of Main and Buttonwood. I thought the world of Pearl and George. We spent years of Sunday school and ballgames together. I was closer in age to your aunts and my brother Michael to your uncle. I don't get back to Lambertville much, but always think of my great neighbors and friends. You're in my thoughts. ~ betty lou ent, naples, Florida
Comment Share
Share via:
TN

Posted Oct 02, 2019 at 12:00am
I'm very sorry for your loss. I grew up with the family and have many great memories, especially in the choirs at First Presbyterian and football games. My thoughts and prayers for all. ~ Rhonda Johnson Andrews, Bonita Springs, Florida
Comment Share
Share via: 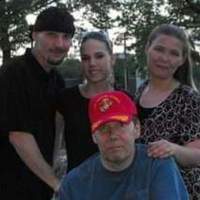