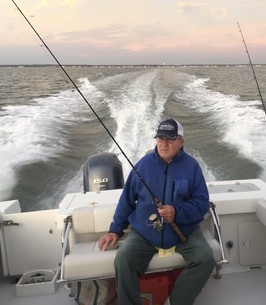 In his youth, Jim was a talented athlete which earned him a full ride scholarship to The Hun School in
Princeton, where he was later inducted into the Athletic Hall of Fame. He received this honor for
his skill and abilities as an all-star baseball, basketball and football player. He was very proud to
have held the position of captain of the baseball and basketball teams during their undefeated
championship seasons. He then went on to attend college at Rutgers University.
Jim loved a hot cup of coffee, a donut or three and sharing a good laugh with family and friends.
He made many fond memories while working as a machinist at General Motors for 30 years
before he retired. He adored his labradors and enjoyed working as a dog trainer for duck
hunting and to compete in retriever field trials.

His true passion was fishing, fresh water or salt water didn't matter as long as he had a fish on. When he wasn't communing with the wild, he could be found in his workshop painstakingly carving, burning and painting wooden decoys by hand. He created everything from primitive duck decoys, intricately dressed mallards and hens, to graceful swans and geese, delicate house wrens and cardinals, and bold hawks in mid-hunt. He was truly a master craftsman when it came to building fishing rods and carving his birds. Jim had a wonderful sense of humor, always quick to share saucy limerick or telling a tall tale. He was a devoted husband and father to his four children, and he enjoyed spending time with his grandchildren and great-grandchildren. He adored his family and always wore a smile when they were together.

Donations can be made to Samaritan Hospice (SamaritanNJ.org) in his name. Services will be
private.